some fun with the new drawing pad

thinking about putting this one up soon, getting some reactions/critiques first…

A friend over at unurth noticed some new paste ups in West Hollywood, thanks to unurth.com for taking a few moments to document some work.
Leba featured on unurth.com | click here to view 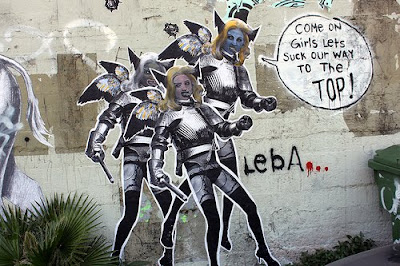 I decided I wanted to reveal some of the darker uses of the u.s. census.
Throughout history information gathered by the census has been used for things ranging from rounding up Japanese Americans during WWII, to illegal government spying programs. What is the true underbelly of the census beast? This billboard try’s to shine some light on the otherwise seemingly cuddly census. : Photo by Lord Jim

Lincolnstein in downtown L.a. on 6th and pine, photo taken by QsySue
QsySue : link to the original pic

thanks jim, he got some nice shots of some work…

hey all! Sneaker academy down in san diego is getting closer and closer to launching their new site update, in the mean time i’ve been updating and optimizing the home page basketball game so its ready for the launch,

check it out yall!

a not so friendly neighborhood lurker

check out one of the ads in action, click to visit the San Diego Science fair website!